Invitation to build a New Humanity

Humankind experiences a chaos which reflects its internal disharmony.

We state that essentially the human being does not know what he is doing. He’s actually sleeping profoundly and his greatest illusion is believing he is awake.

We want to share among all peoples the culture of Awakening, of Non-Violence and of Brotherhood: “Never ever respond to violence with violence”.

Then, if we want to build a new humanity, the human being has to be considered as the highest value, that is to say: “Nothing above the human being and no human being below another”, since there will be no progress if it is not of all and for all. We aspire to a world with multiple expressions where cultures integrate a Universal Human Nation converging in diversity.

Nowadays the wealth generated by all human beings is concentrated in a few. We claim for a new distribution to meet the needs of each and everyone, to ensure equal opportunities for all.

May spirituality and transcendence be sought in one’s sleeping depths. In that depth full of unknown forces and immense powers. May our purposes be: to wake up every day harmonizing thought, feeling and action, “treating others the way we want to be treated”.
Let us free ourselves from vengeance, preparing the way for the New Humanity. 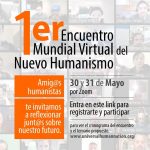